While not an update on the "march to staging", this is one that I wanted to share that answered a lot of questions for me.

Recently on Facebook (and about the only redeeming thing ABOUT Facebook) is that a woman who joined one of the groups I am a member of, was going thru her father's collection (he was an ex-employee) and had been sharing some reports and other such things with the group. She posted pieces of a November 1943 Director's Special that seemed very interesting, and she was more than happy to make scans of it! So less than a week later, I receive 79 scanned pages of this report, and low and behold, it had some VERY enlightening info that is specific to my layout!

In case you aren't aware, my LV industrial branch on the layout is (was) called the "Edgewater Branch", and it served, in particular, a milk unloading platform (it's main reason for being), a large coal trestle, and a few other little industries. Also, carloading car counts between the various NY railroads via carfloats are mentioned, and even though I am modeling 1951, and this was during WW2, it's still an interesting insight, to say the least. In all my research on this piece of the railroad for the last twenty years, I've yet to see any of these details that I quite frankly, feel are SO important to prototypical operation.

So, without any more ado, here are the two pages that pertain to my layout that I am so excited to share with all of you (I would suggest saving them to your computer or other such imaging software to read, as they are too small to read in the blog because of the way they were sent to me)......

I hope that for any of you out there still reading this, that you are able to come into such detailed info for your own particular prototype, because it's these little details that make prototype operations so much more enjoyable, at least for me! 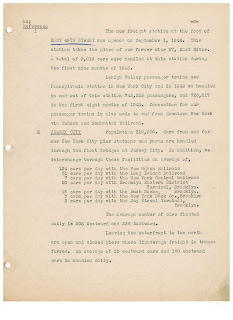 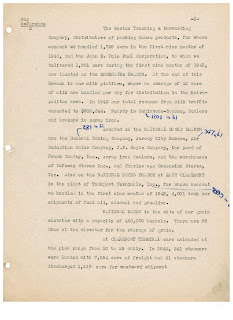