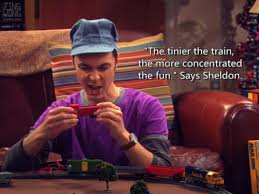 Well, in this week's late entry in the "Web Wednesday" weekly spotlight, we're gonna put Sheldon's theory to the test!

There's a lot of ground to cover, so I won't waste much more time getting to the point.
N Scale holds a certain amount of nostalgia for me, as one of my first train catalogues (after Lionel, and Walthers of course) was a Arnold/Rapido catalogue from the early 1980's - 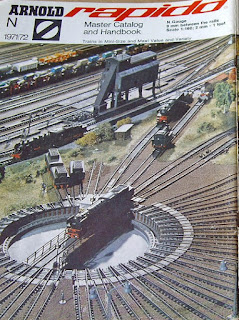 Even though 90% of what was inside was of European prototypes, there was some North American stuff, and by looking at the cover, they made it seem so detailed....Not to mention, look at how many trains you could get into a tiny space! My first practical encounter with N Gauge was my friend David Wojotowicz's 4x6 layout (David was my first model railroading "buddy" when I was in seventh grade in 1982, the year I "discovered" railfanning). Being N gauge of the 1970's/80's "technology", it didn't ever run very well, so we all but lost interest in it. However, when his dad got transferred the next year and they had to move (thus, "everything must go!"), I could have bought it, but I remembered the crappy running characteristics, plus, I had already dove well into HO scale the year before with my Athearn SD-45 set, so I passed. Oh, did I mention I read and re-read my copy of Kalmbach's "How To Model The Clinchfield RR in N Scale" book so much, it fell apart? It opened the door to prototype model railroading to me, and if it hadn't been for the level of modeling (out of touch for a 16 year old, and even this 46 year old!) and the sheer size of it, I think I would have begged my father to let me switch over to N right then and there.


Now, here we are 30+ years later with N gauge engine (and cars) that not only run like Swiss watches and have much better molded on detail, but hobby industry that fully supports the scale, unlike having to suffer buying things like buildings and details that looked like they were straight out of the UK or Germany (which they were) anymore, so.......

There have been MANY times that I've said to myself, "Self, what would it take to sell of all the HO equipment you have, just so we could REALLY model the Lehigh Valley like you mean it?!?".....And even though companies like Atlas have SEVERLY tempted me with products such as this -
And even though companies like Atlas have SEVERELY tempted me, such as this - 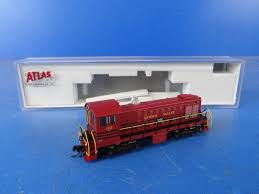 I have remained "true to the HO cause".......For now......
Anywho, that's my personal run-in with N Gauge, and you're not here to listen to me wax poetic, but rather to learn about the neat layouts I've discovered as of late, that I think you should be checking out, NOT just because they're N gauge, but because there's something to be learned from them regardless of scale, am I not right?
First up, Greg Johnstone's L&N RR Knoxville Division at - http://www.lnrrknoxvilledivision.thejohnnos.id.au/
Yes, from Australia! While not updated since 2014 (and I know a thing or two about not updating things, now don't I?), there is still a lot of good stuff to read up on here.
So, keeping the coal hauling theme going, check out Lee Weldon's WM Railway at - http://www.wmrywesternlines.net/
This guy is doing some impressive prototype model railroading in N!
How about Ken Borowski's Clinchfield? You remember the Clinchfield from the pages of MR, right? Well, Ken has taken a different approach on what is basically the same section of railroad and this is the result - http://www.clinchfield-nscale.com/home
There's just something about the Clinchfield that resonates with me (I guess its that darn book!), but I also love the scenery-to-train ratio that makes things look like you're really in the mountains of North Carolina!
And then we have what is essentially a MR project layout re-born, but is none the less interesting and well done. Check out Dave Vollmer's PRR Juniata Division layout at - http://thevollmerfamily.com/Pennsy/
Though not on the same scale, this layout reminds me of Bill and Wayne Reid's WM/N&W/PRR-themed Hagerstown layout from the pages of MR. It also reminds me, a well done layout CAN be an oval, and still be engaging. Some of us are "runners" and not "operators" (but why WOULDN'T we WANT to be?!?!?).
Last but not least, the "Mac Daddy" of N scale layouts (at least lately in the hobby press), and that would be Mark Dance's CP Rail prototype, Columbia and Western layout at - https://www.flickr.com/photos/27907618@N02/sets/72157624106602402/
You've probably seen this before In the pages of MRP, but I mean this layout takes N scale to the next level, with innovative staging, double mushroom decks, and two kinds of swing gates to cross isles with. oh, did I mention it has a carfloat operation?
Well, I could keep going, but you get the idea. N gauge model railroading is leaps and bounds on the reliability and detail scale from what I had when I was growing up, and I have even had the opportunity to operate on a proto-freelanced "N" layout here in New Jersey that actually "operated" with car cards and lot of switching. So yes, it CAN be done!

And now for something completely different....... 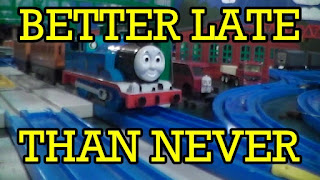 That's right, it's another week, and just because it's Thursday, that doesn't mean we can't have a "Web-tastic Wednesday" on a Thursday, especially since "Thinkful Thursday" sucks even more for a name for this feature than the one I'm using now........
So........I said last week that I'd be showcasing a blog or two this week that was outside my "modeling comfort zone".....Which is to say, that it's a layout or prototype subject that has absolutely NO relevance to what I model or have an interest in normally, but yet is something that even I can appreciate from a creative standpoint. Just because I can't fathom why anybody would build a layout populated by Thomas The Tank and Friends on the moon in the year 2436 and done in Z-n3 scale, doesn't mean I can't appreciate the hard work put into it.......OK, maybe that example is pushing it, but you get the idea....
So, with that being said, let's take a look at this week's "out of the box" links, and I'll explain why I think they're worth a look.....
First up, we have Darel Leedy of Colorado and his Colorado & Southern in Sn3 layout at - http://coloradosouthern.blogspot.com/

OK, so what's so neat about Darel's layout? Well, I have to admit that normally, not a thing about it would ever get me to look twice at it. I'm not a fan of narrow gauge Colorado (or other Western locale) railroading, and I'm not an S Scale'er. That aside, let me tell you why I DO think Darel's layout is neat. I DO think S Scale is a neat scale to model in (narrow or otherwise), and I DO have a certain level of appreciation for Eastern narrow gauge after visiting the EBT a few years back, but I like it mostly (and especially so) because it's different! Yes, exactly, different! I never in a million years would be able to model, as it appears he has done so from scratch in many instances, all the cars and other buildings with such prototype fidelity and finesse as Darel does. Now yes, a company called PBL makes a lot of kits and engines in S narrow gauge, but the engines are brass, and the kits are of the craftsman nature. What that comes down to is skill, patience, money and time to model it all, four things that are NOT in my wheelhouse! Case in point, this model - 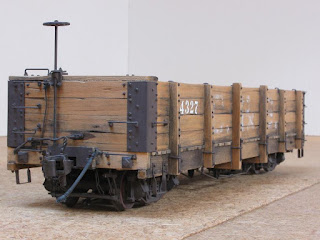 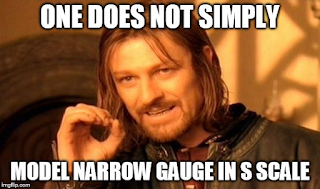 And THAT'S why I think Darel's layout and choice of prototype is neat! (that, and for some crazy reason he features my blog in his roll!) Thanks Darel, keep up the good work, I'll be checking back regularly!
Now, on to link number two.........Do you fancy a spot of railway modeling from across the pond, Guv'nor? 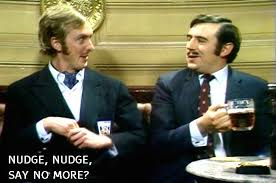 Then check out - http://www.nevard.com/ and http://nevardmedia.blogspot.com/
Chris Nevard shows us why and how European (in particular, UK) model railroading in an insanely small space is so neat! Typically done in OO scale (their version of HO, if I recall correctly), these shadowbox model railroads are short on track and equipment, but not on detail. 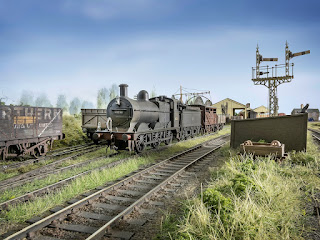 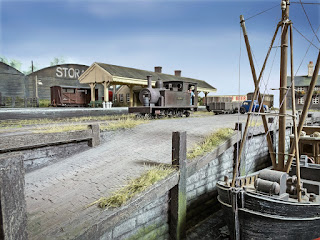 I mean, good Lord, look at that, and all done in a approximately 14 foot by 2 1/2 space! As I'm sure you are aware, our European brethren are not blessed with basements, so they instead prefer large meets on do FREMO-style layouts, or small self-contained modules, or as I call them "exhibition-style" layouts. Apparently, Chris is a "serial module builder", as the one featured above, called Combwich, is his oldest (begun in 1979) and has been added onto and upgraded over the years, and he's constantly building more modules to add to his collection. I mean, he must have a warehouse somewhere to store all his modules with what he appears to have on his blog!
Yes, I know the engines look like Thomas and Friends, but the modeling is top notch, and I think we can all learn a thing or two in realism from these guys, and that less is more! (something I have CERTAINLY come to realize over the last year or two, or three)

Oh, and honourable mention, Chris is a Uke player, so he gets bonus points from me for being a musician AND model railroader!

So go! Go now and check out Darel and Chris' layouts, and get out of YOUR comfort zone and just enjoy it for what it is even if you think it's "not your thing" - Model railroading at it's neatest (and finest!)

Next week - Just because its smaller, doesN't meaN its any less fuNNer.......