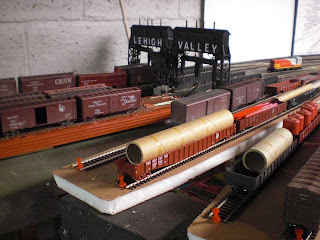 Yes, yes, I'm still here...I promised my friend Ted DiIorio that I would update my "freakin' blog" tonight, as I admit, it is long overdue.......I spent most of the summer "away" from model railroading (at least actively working on the layout that is), but it's soon to be Fall, and the guys are coming over enmass this weekend to get me ready for the next shakedown session in November. Big things are in the works, but I am not ready to divulge just what yet, so stay tuned.

So, I actually have done some work (mostly wiring, and who wants to see a post about wiring, Ted?) and a little bit of track work. So with that in mid, here's the track work....... 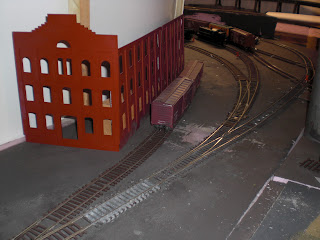 This siding was originally opposite (behind) this spot, and it never really sat well with me. So I figured one night while I was bored (must have been no good NCIS repeats on TV), what the heck, lets move it! Not only do I like it (it is visually appealing to me) but it also "hides" the curve in the backdrop here (the backdrop in this spot is the previously reported "hole in the wall" that needs fixing this weekend). Eariler this Summer, Ted also suggested I rearrange my CNJ yard leads, which I did.... 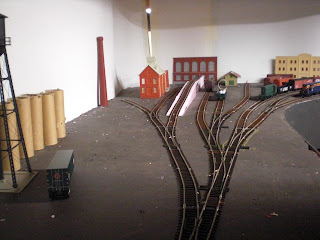 No, that's not the crack in Amy Pond's bedroom wall in the background...C'mon, no Dr. Who fans out there? Really?!?

Trust me when I say that the leads were a cluster *#@% before this......It all began when I wanted more of a switching lead, and Ted's suggestions were great and well reasoned......I even added a second passing siding. This extra part of the layout (the CNJ's Henderson St. Branch) is a fun addition to an all-LV layout, enough to keep two guys very occupied all night (or so I hope). 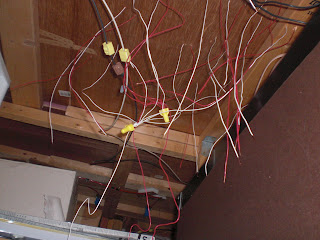 Now see what you made me go and do Ted? You said "post to your %#!$ blog, Ralph", and I said "But Ted, I got nuthin'!", and you said "Stop slacking!".....OK, fine, you asked for it!
So, with that, exit our layout builder, stage right.......Hopefully, I'll have some exciting progress photos to share after this Saturday....Or at least some goofy photos of the guys trying to fix my layout. Either way, it should be interesting!
﻿
Posted by Ralph Heiss at 7:26:00 PM 3 comments: