While I haven't completed any big projects, I have been in the basement this last week after haveing some spare time after Christmas, and also visiting with friend Jim Fawcett and listeneing to his plans for his soon to be build 1965-era B&O layout set in Maryland. I always get a little extra inspired to go work on things after an op seession at one of my friend's houses, an RPM meet, or of course after realizing tha tthe next shakedown of the LVHT is only two months away!

So with that, I headed to the local hoby store on Friday with my wish list of turnouts in hand for the track changes that were suggested after the last shakedown in November. I had been hoping that I had whatever I needed on hand in my "left overs" box of turnouts so that I didn't have to spend any more money (yeah, like THAT wasn't gonna happen!). I came back with about $250 worth in turnouts, and that was only for five turnouts! Well, had I not bought two Peco Code 75 double slip switches priced at about $86.00, and 2 Code 83 turnouts (another $25 each) and only lonely Code 100 curved turnout (only $18.00), I would have had money left over to buy some cars and whatnot, but there went that budget! 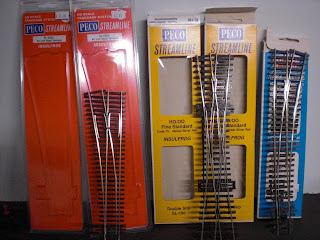 Boy, this better be worth it!﻿
So, here's the rub......The guys were saying that some of my tracks in my float yard needed better access when pulling a float, so as not to have to run up and down the entire length of the yard (15 + feet) to get back ﻿to the carfloat. So they suggested that I not only allow more access to any given float bridge lead, but also break up the long tracks in to 5 car length bunches as it were. In order to help give you a better idea of what I am taking about, below is a rough, yet accurate as far as turnout placement goes, "lay of the land in the yard in question.

52 turnouts and counting!
My main concern is that now I have WAY too many turnouts in this yard, let alone too many double slip switches (there are four already, two on each end), but yet I like what they flexibility they give me and my crews. On top of that, I now run into the "comfort factor" of knowing how the yard were really laid out (I have a valuation map of the yard, as well as some great overhead shots), and the decision to "err on the side of model railroad operations", or stick to the already crunched, selectively compressed yard trackage and turnout placement. Before I go any further, below are a few shots of the yard tracks "now", and "after" with the turnouts laid in place. 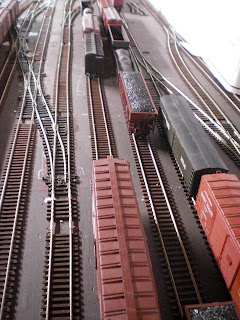 "Before" - With the already installed double slips that span (r to l), Eastbound Main, Westbound Main, and yard tracks 2 Dock and 3 Dock. In this configuration, there are two float bridge leads that only have access to three yard tracks, and one with five. Switching flexibility is not a good as it could be. 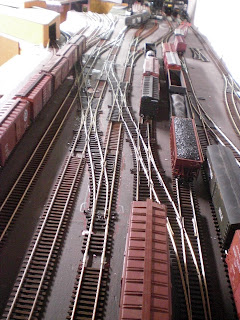 "After" - OK, here's a better shot, of the yard now with the "new" pair of "million dollar" double slip switches. This gives you a better idea of how the float bridges are accessed. Now, all four float bridges have access to at least four yard tracks each (including the 2 Main Line tracks). Flexibility has increased, but at the price of complex, and unrealistic trackwork. 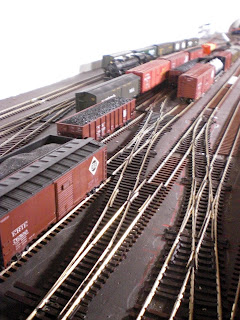 "After", version 1a - Ok, here's the same idea, minus one double slip switch. Better, but still one complex turnout too many in an already cramped space.
Now normally, I'd have no problem ripping up turnouts and tracks to more closely lay them out prototypically, or to gain operational flexibility, but not only are the double slip switches in place (and the two other turouts conencted to them on each end) and already "glued" down to the styrofoam base of the yard with adhesive caulk, but one was also dammaged by an errant soldering iron during wiring work, and I fear for it's continued "well being" if I try to take it up (yes, I know it can be done, but at what price?)
Soooo............What to do? I guess I will consult my team of "highly trained yard specialists", aka friends in my modeling circle with lots of ideas and no shortage of thoughts/coments/opinions, and see what they think. Heck, they are the ones who have to run it, so I feel they should be (somewhat) happy with it! In the mean time, if any of this makes sense, I'd like to hear your thoughts/coments/opinions, too.
So, with that, it's time to enjoy the New Years Eve Big Bang Theory marathon with my girlfriend, and since I'll have time between now and Monday to do more layout stuff, stay tuned for another post on some other track work chages I have planned, and have a fun and safe New Years Eve!
Posted by Ralph Heiss at 5:04:00 PM No comments:

Email ThisBlogThis!Share to TwitterShare to FacebookShare to Pinterest
Labels: Trackwork

'Tis the season for more updates

I know it's been a while, and I hope y'all haven't lost just yet.......I will admit, I haven't been as busy working on things since the shakedown in November, and another one will be right around the corner in 2012 before I know it.
I spent a bit too much time in the last few weeks contemplating some track aditions/revisions, and after I realized that I need to FIX things first that we found during the session before I go and add/subtract things, I switched gears and began how to contemplate my staging yard lengthening project (as suggested by my friend Neil Henning), which I hope to have time to post some new photos of this weekend.

Other than that, the week was also filled with designing and streamlining more operational paperwork (stop the insanity and BUILD something I hear my friends Dave and Ted say!), getting ready for my bands last gig of 2011, and trying to decide what to buy people for Christmas (and no, I have not bought one thing yet!)

So, let me wrap things up for tonight, but rest assured there will be more layout posts coming before New Years!