Conjunction Junction, Why All The Destruction??!?

I just couldn't resist poking fun at my favorite Schoolhouse Rock song! (my appologies to those of the young'ins out there who don't get the reference, your loss!) 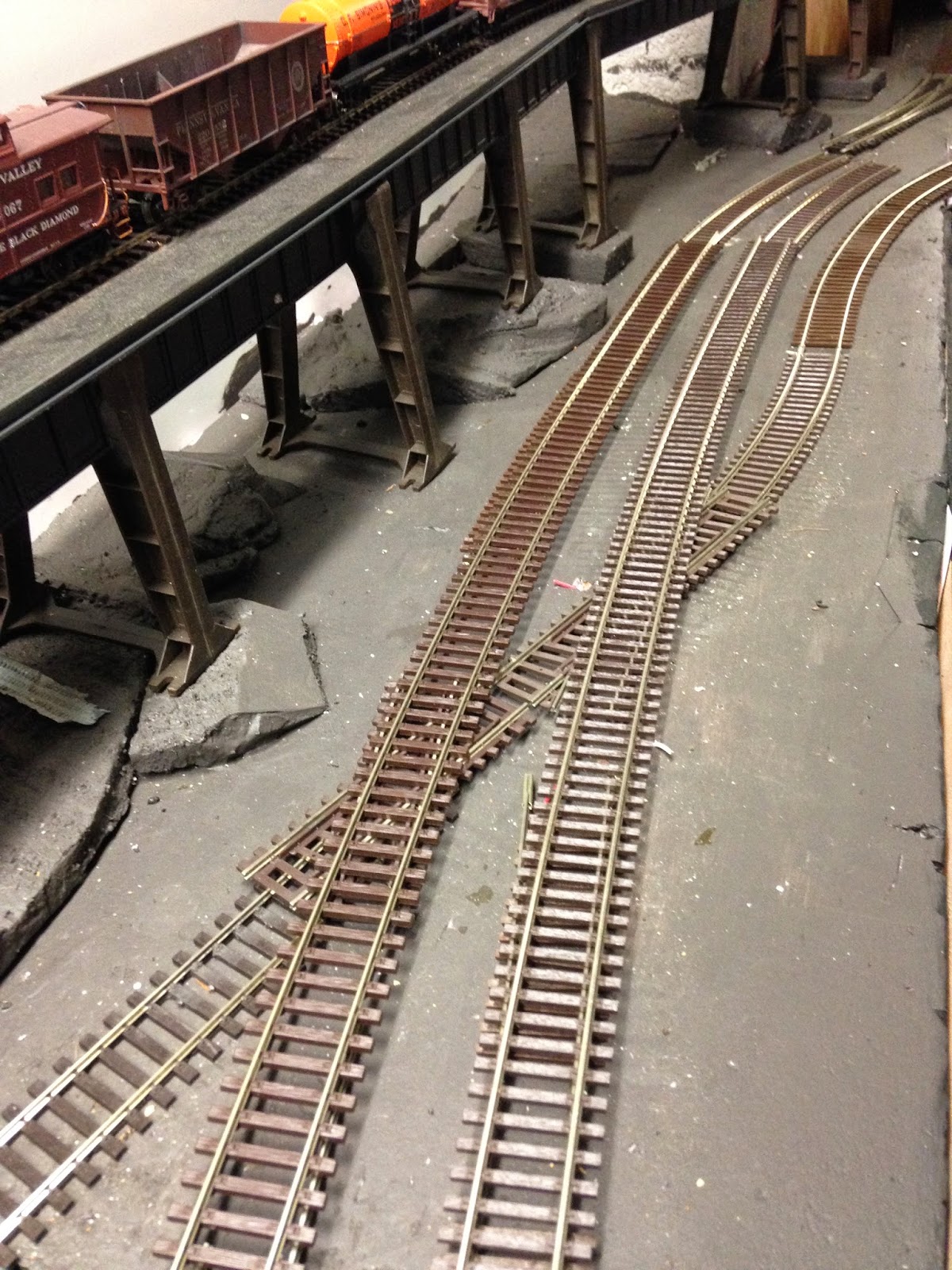 So, by nature of the above photo that looks like I dropped a handfull of flex track on the layout and then walked away (and most of the time, you'd be right, I did!), lest it be thought that I actually went  downstairs to WORK on the layout his weekend (gasp!), while I was on a non-layout related "mission" to the dark, dank recesses of the basement for water leakage (my hot water heater has reached the end of it's service life by doing a slow leak across the floor, and no Ted DiIoio, I'm NOT into trying to recreate NY Harbor in scale down there!), I came to the back end of the layout wherethe layout starts or ends (depending on how you look at it), and started thinking (and that's NEVER a good thing)....... 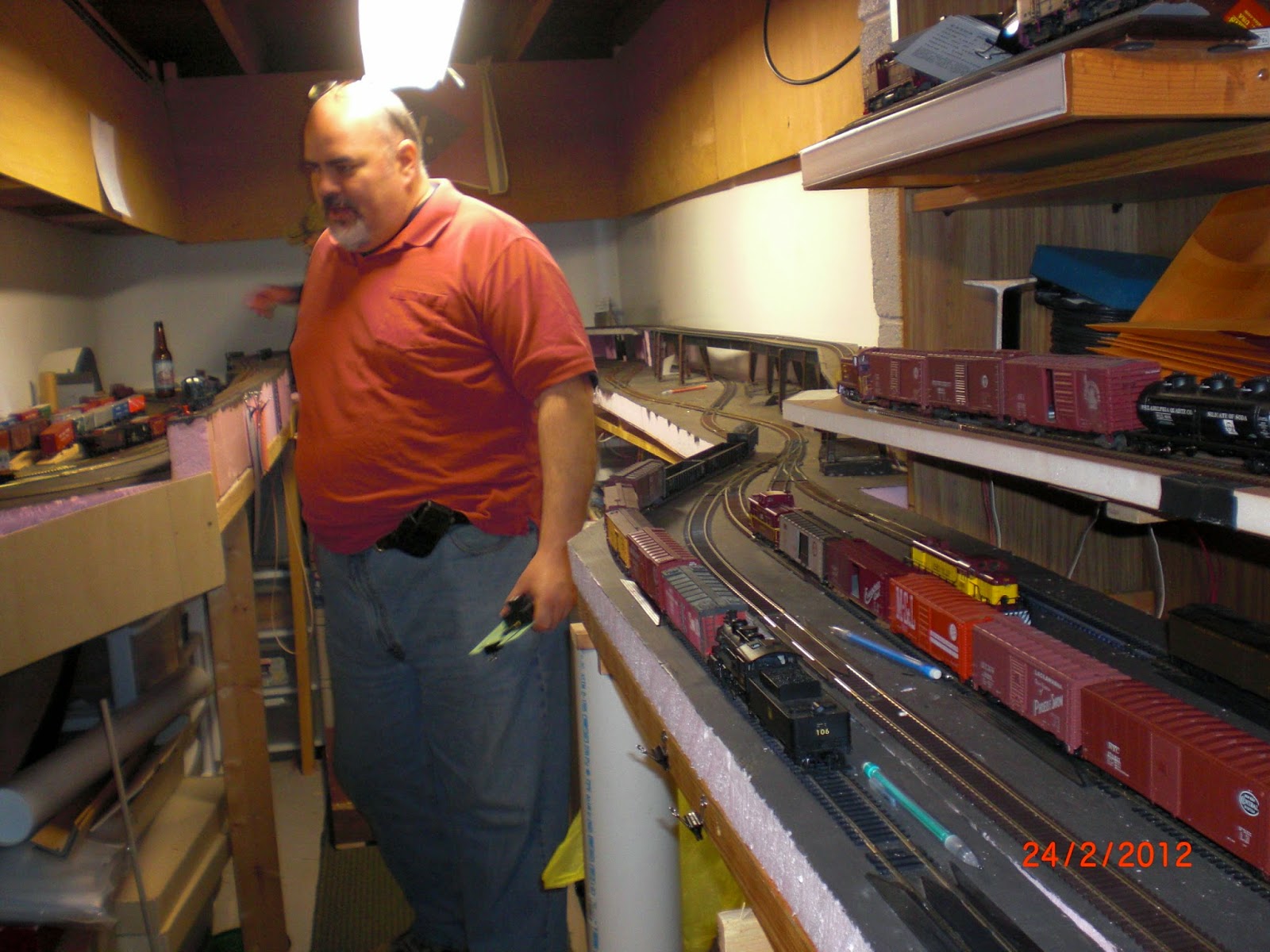 Layout to the left of me, Staging to the right......(further appologies to AC/DC)

As seen in the above photos, the lower tracks (and the ones we're focusing on in this blog entry)represent the LVRR Main Line between Oak Island Yard and the float yard at Washington St., while the elevated tracks represent the National Docks Branch. Now, it's not terribly obvious in these photos, but this is the pinch point to the flow of traffic which  prevents trains from simulatenously leaving and entering the layout, as four Main Line tracks go from two to one, and then four as they enter staging, all in the span of four feet. This prevents Yardmasters at each end from simultaneously moving trains back and forth as expeditiously as possible. That has yet to case a problem in any of the ops sessions we've had, but it always bugged me (so thus, why did I build it like that to begin with? We may never know....). Since the layout is, for now, dispatched sequentially, this means a train that went eastbound has to return westbound again before another eastbound can depart, the biggest reason being to avoid any "cornfield meets" on the single track section. I've thought about trying to fix this "issue" over the last year or two while the layout has been embargoed, so I FINALLY decided to do something about it! - 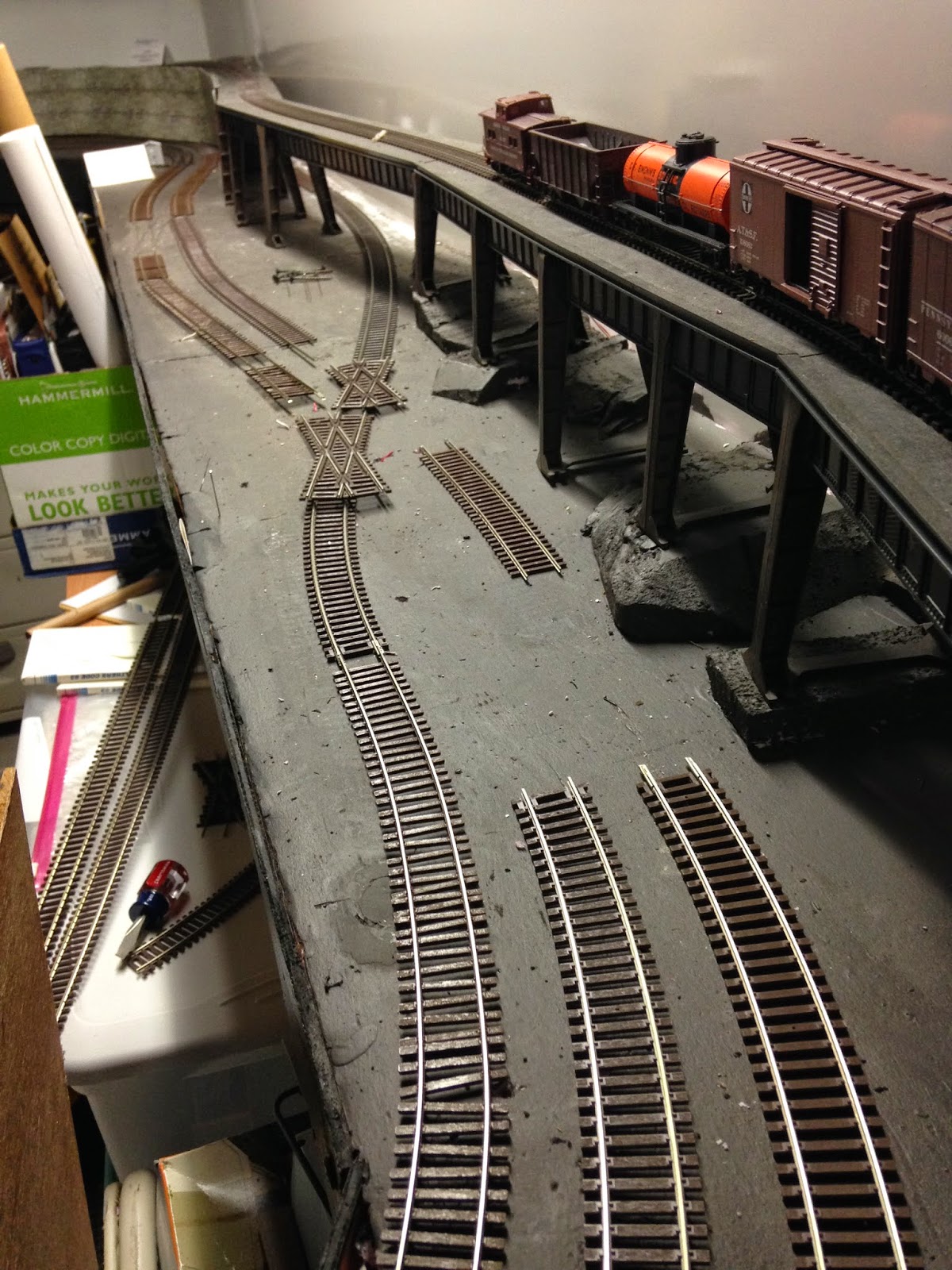 Umm, I'm pretty sure this'll work, but I think something is missing!

I'm PRETTY sure I have just enough room to re-align the tracks at the staging yard throat and to swing the CNJ single track Henderson St. Branch across a newly double-tracked LVRR Main Line WITHOUT having to move the elevated NDB or widen the benchwork (since I started writing this, this is 95 percent assured). Once complete, this will allow me to operate a more fluid traffic pattern on and off the layout, and hopefully measurably improve the ops scheme, allowing the yard to operate more fluidly in the process. Now, one "eastbound" main will serve two staging tacks, and the "westbound" main will serve two. The only positive attribute to the old staging yard throat being served by one track was that all four tracks were equqally acessible, but splitting the yard two by two is OK, as the planned train fequency will not overwhelm the East and West staging and their ability to move traffic. Train lengths are fixed at 15 cars with caboose and two switchers, and the staging tracks are long enough to fit without fouling the parallel track, and even if they do, having the two dedicated mains now allows them to act as temporary yard leads while the cars are fiddled off the layout without fouling the other mainline track, should they need to that is.

As you can probably tell above, the original crossing (bottom) is a code 83 Shinohara 30 degree crossing, so I dove into my "track bits" box and unfortuantely, nothing fit, using the 'ol Mk.1 Eyeball test. But what I DID have was an otherwise far from fine scale Atlas Code 83 18 degree crossing, and it looks like it is the perfect angle to fit. I haven't gone to the Walthers catologue yet to see if they make a similar degree crossing, but I may just stick with the Atlas one (yes, I'm, cheap, damnit!), because I know it'll fit (well, I'm PRETTY SURE it will!).

Now as we move onto the layout and get closer to the float yard at Washington St., we run into the point where the runner track (which is also one leg of the Jersey Ave. Wye AND provides access to Grand St. Yard), we run into the backdrop that spearates these two switching areas, preventing crews from seeing (and following) their train....... 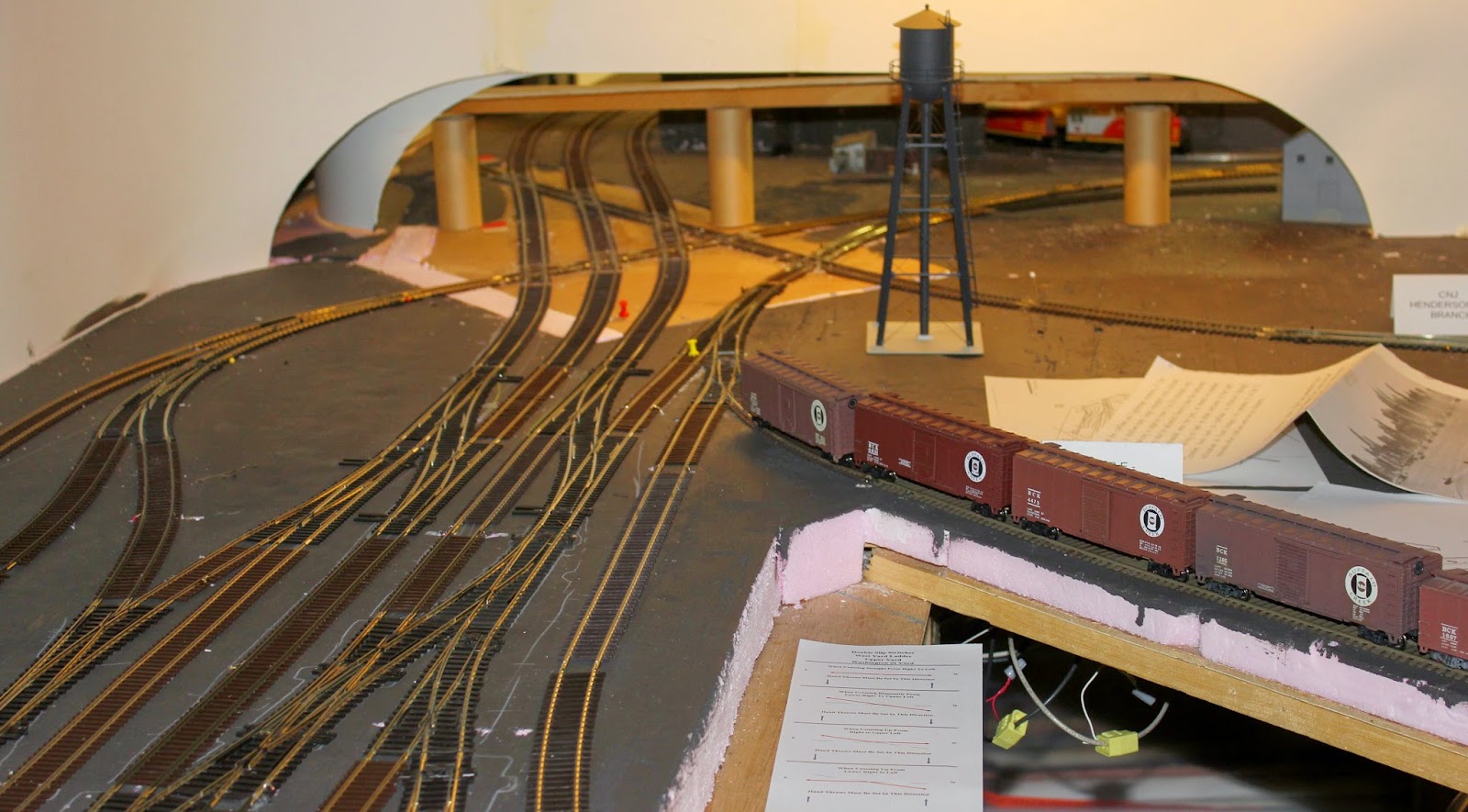 Although this view from the other side of the backdrop than the area we're discussing, the "hole on the wall" separates East from West on the layout, and will be "softened" by the NJ Turnpike Bridges that crossed the RR at this spot, two lanes on each side. 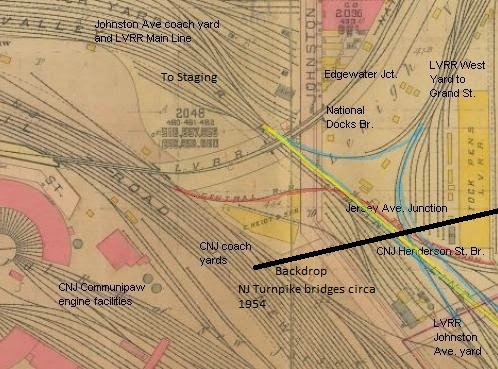 A vintage property map, with the routes involved highlighted in Red (CNJ) and Blue and Yellow (LV), and the approximate backdrop location (Black)

The plan here is for Eastbound trains to be "announced" to the Washington St. Yardmaster as being "on their bell" by the Communipaw Block Operator's position  (not ever a real place on the railroad, but a neccessary evil, for now at least, to control traffic thru the backdrop), and will be staffed by the Grand St. Yard Yardmaster, since he stands in that corner as it is, and everything goes past him. Likewise, Westbounds will be handed over to him here to head into staging. He's in eyesight of the Oak Island/East Claremont staging Yardmaster, and (by way of handheld radio) in touch with the Washington St. Yardmaster, so verbal authority will be used to clear trains through the block limits. Movements in and out of Grand St. Yard also will be controlled by this block station.

Eventually, I'd like to install track detection (and maybe annuciator bells?), and while I'd love, Love, LOVE to have semaphores (unprotoypical,  there were never signals here - to the best of my knowledge, that is - as it was all operated under yard limits), I'll settle instead for a much more visible and understandable - and visible - kind of solution. I'm envisioning is a sort of  "cab signal" mounted at viewing height in the valance for each track, showing track occupancy, one for each track on each side of the backdrop and hooked up to said IR or photocell occupancy detectors to trip the cab signal lights, though that kind of "electronic wizzardry" is beyond me. Luckily for me, I know people who know how to install this kind of s**t!

So that's that, for now at least......Let's see if I can put it back together as fast as I tore it appart (luckily for me, I had never gotten around to soldering in the feeder wires to the track here!), and I'll eventually report back here with the finished product....Just don't hold your breath or anything!